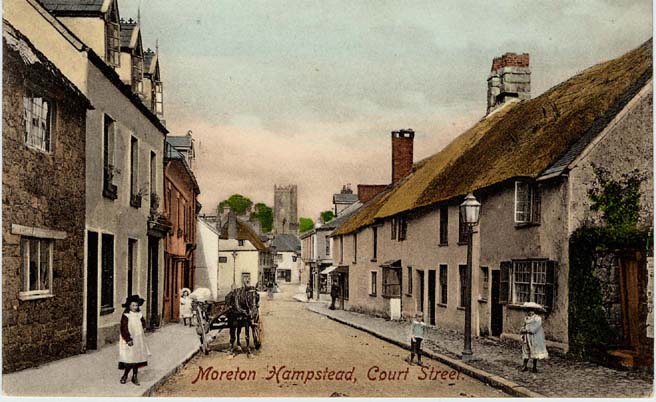 The street is named after the area known as Court, originally a small cluster of houses near where Court House stands today. There is no known evidence that suggests a manorial court leet was held at Court (despite the English Heritage list entry for Court House) but the small cluster of houses as a separate hamlet may indicate a manorial barton, in which case a court may well have been held in the open air nearby. The place is included in the Courtenay Survey (circa 1790) where John Pinsent is said to occupy two houses (being five dwellings) and 62 acres, one of which was court house. [IJFM]

1 COURT STREET. Listed by English Heritage (ID no. 85043) as ‘House with shop premises, originally probably only a house. Circa late C15 or early C16 with later C16 and early C17 alterations, extended probably in C18 and remodelled in C19... This is among the earliest buildings in Moretonhampstead Town and one only 4 or 5 with Medieval smoke-blackened roof timbers. Medieval roofs are rare in towns. The roof truss with the unusual apex yoke is particularly noteworthy.’ Currently in use as a newsagents (2011).

3 COURT STREET. Listed by English Heritage (ID no. 85044) as ‘Cottage, probably part of No. 1 (q.v.) to left (east). Probably C15 or early C16, floored in circa early C17 and remodelled in circa early C19... This is one of only 4 or 5 in Moretonhampstead town with medieval smoke-blackened roof timbers. Medieval roofs are rare in towns.’

5 COURT STREET. Listed by English Heritage (ID no. 85045) as ‘House in a row possibly originally part of No. 7 (q.v.). Circa early C17, with circa early C19 alterations and C20 reroofing... This is part of one of the most complete rows of early houses to have survived in Moretonhampstead.’

7 COURT STREET. Listed by English Heritage (ID no. 85046) as ‘Shop premises with domestic accommodation above, in a row. Possibly originally part of No. 5 (q.v.). Circa early C17 with circa early C19 alterations and mid C19 rear extension... This is part of one of the most complete rows of early houses to have survived in Moretonhampstead. Included for group value.’ Currently in use as a butcher’s shop (2011).

16 COURT STREET (THE PLYMOUTH INN). The last inn to be built in Moreton. It was established in the early 1830s by John Ballamy, who came from the South Molton Inn, and it remained in the Ballamy family for over 70 years. Several of the landlords were wheelwrights, a trade often associated with inn-keeping, and hooks for tethering horses are clearly visible at the back. The inn was ideally situated to get traffic coming over the moor from Tavistock and Plymouth. This inn is unique in having had four different signs over the years. It also had the large safe which was used to keep the money made by drovers who had done good business at Moreton markets. It closed as a public house in 2003.

38 COURT STREET (LUCY WILLS MEMORIAL). BOROHAYES. The original name of Coppelia House, now a residential home. The Convalescent Home was set up in a house bought for the purpose by the Misses Phillips of Torquay in 1873, and they bought the property in 1877. It was gradually enlarged, and was run as a charity, providing for people from the Torbay area to recover from serious illness. It is now privately owned, as Coppelia House residential and nursing home. We have a picture of a tablet commemorating its foundation in 1873, and later enlargement, and a postcard showing the Convalescent Home in its early days, sent in June, 1906: the text reads "My dear Sister & Brother, hope you are quite well and poor Nellie. This is the house, I am getting on famous, I shall be quite well by the time I come home, Matron thinks that I ought to stay another 3 weeks. I have wrote to ask mother what she thinks about it. Hope the children is alright. I go for some nice walks and we do enjoy ourselves. With love to you both and Nellie. I miss the milk. Your loving sister".

Earlier, under the name of Borohaye House, the house had been occupied by the Bowring family. It was bought by William White, the solicitor, in 1854 and passed by him to his brother-in-law Edward Bowring who owned until his death. The census for 1851 shows that Thomas B. Bowring (born in Newfoundland) was staying there with his uncle. For more about the history of this property see Borohaye House.

COMMUNITY HALL. This hall, between the terrace of shops and houses (nos. 1-7 Court Street) and Coppelia House, started as the Gordon Hall, built in 1895 for the YWCA, then became a private school run by Miss Warner. Click here for more details.

COOKHAY. Included in the Courtenay Survey (circa 1790) as ‘Crookhay’, where Mr William Bragg is in possession of half an acre. A substantial Victorian semi-detached house, now partly used as a guest house.

COURT HOUSE, THE. Listed by English Heritage (ID no. 85047) as ‘Circa early to mid C17 with late C17 wing... The Court Leet was held in this house until about 1847). An interesting example of an early Cl7. 2-room plan house with a later C17 rear wing. It is interesting that the kitchen is the smaller of the 2 rooms. The exterior has been little altered since the C19 and in spite of some C20 alterations to the interior there are many surviving interior features of high quality including the unusual granite arched kitchen fireplace.’ One of the two houses in the occupation of John Pinsent in 1790, as noted above in ther entry for Court Street.

MALTSTERS HOUSE, THE. Listed by English Heritage (ID no. 85042) as ‘Shop premises with domestic accommodation above and behind. Probably mid to late C17 with circa early C19 alterations... This is an interesting later C17 town house, reputedly a maltster's house.’

THE RED LION. It stood close to the site occupied now by the Community Centre, with stabling behind which could be reached by the alley from Pound Street, with a right of way for horses and carriages. The Red Lion was well established by the late 18th century and was a popular meeting place for Societies, including the Lottery Club, whose over-enthusiastic celebration of an anticipated £30,000 win in 1800 resulted in drunken disorder! Sanity returned when they realised they had not won after all ,and the Club was wound up a couple of weeks later. The inn was also popular with the Napoleonic prisoners on parole'. Long after, in 1847, one of the Dutch Naval officers wrote several letters to John Ponsford, the agent in charge of the prisoners in 1810. He reminisced over the happy times they had enjoyed in Moreton 'flirting with the girls, acting in the pantomime and even visiting Exeter'. Only one Dutch prisoner, called Papendrecht and known as 'Papie', is said to have caused any trouble. He liked his 'grog' and paid many visits to the Red Lion. John Lamacraft became landlord in 1813, but by the fire of 1854 it had been converted into two houses for some time.