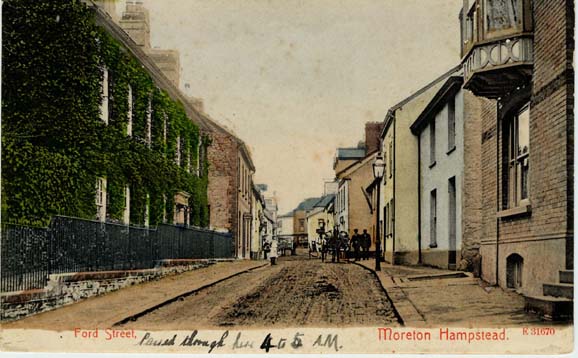 1, 3 and 5 FORD STREET. Listed by English Heritage (ID no. 85067) as ‘Originally 1 house, later sub-divided into 2 tenements with shops on ground floor and rooms above. Circa late C16 or early C17, remodelled and sub-divided probably in early C19... This late C16 or early C17 town house is one of a pair of early town houses with No. 17 The Square (q.v.). In spite of having been sub-divided in C19 it retains many of its original interior features of high quality and the largely unaltered C19 remodelled front is still jettied on the first floor making the building an important feature in the centre of Moretonhampstead.’

2, 4 and 6 FORD STREET (PUNCHBOWL INN). Destroyed by fire in September 2007. Previously listed by English Heritage (ID no. 85066) as ‘Originally a house or an inn and once known as The New Inn. Deeds of 1869 show No.6 as "Punchbowl (Inn) with bedroom and carriage passage" and Nos. 2 and 4 as "Three Dwelling Houses". Circa late C15 to early C16, hall floored, heightened and extended in C17 and remodelled again circa mid C19... This late Medieval building was possibly an inn at the height of Moretonhampstead's prosperity in the C16. As well as the surviving Medieval fabric its external appearance has changed little since C19 and with its large thatched roof the building is an extremely important feature in the centre of the town. It is one of only 4 or 5 buildings with Medieval smoke-blackened roof timbers to have survived in Moretonhampstead town.’

7 FORD STREET.  Listed by English Heritage (ID no. 85068) as ‘Small house, ground floor used as shop. Circa early to mid C19 remodelling or virtual rebuilding of earlier structure... This building possibly has some early fabric but its principal interest is its largely unaltered C19 exterior adjoining the end of a run of early town houses, No. 1, 3 and 5 Ford Street and No. 17 The Square (q.v.), which forms an important group in Moretonhampstead.’

15 FORD STREET (OLLYCOT). Listed by English Heritage (ID no. 85069) as ‘House, originally part of No. 17 Ford Street (q.v.). Circa late C15 or early C16, largely rebuilt and extended in early C19... As well as its early origins No. 15 has a largely unaltered early C19 exterior which makes a valuable contribution to the street, especially as it adjoins the Medieval No. 17 of which it was once part.’

17 FORD STREET. Listed by English Heritage (ID no. 85070) as ‘House with shop inserted later, and now just a house again. Circa late C15 or early C16, floor inserted in circa late C16 or early C17 and remodelled in C18, shop inserted in late C19 and rear wing added in C19... This is a late Medieval house with much surviving original fabric and an interesting later development. The last changes were in C19 and it has remained remarkably unaltered since then, both externally and internally. It is one of the earliest buildings in Moretonhampstead and one of only 4 or 5 With Medieval smoke-blackened roof timbers. Surviving Medieval roofs are rare in towns.’ In the early 19th century used as a butchers shop by the owner of nos. 43 and 45 Ford Street.

26 FORD STREET. Listed by English Heritage (ID no. 85071) as ‘House adjoining rear of building on Ford Street. Circa early C17 with C18, C19 and C20 alterations... C17 back-to-back fireplaces are unusual in Devon, although there are some examples in Moretonhampstead including No. 26 Cross Street and Beam Cottage, Ford Street (q.v.).’

31 FORD STREET. Listed by English Heritage (ID no. 85073) as ‘House in a row, probably part of a larger house originally. Circa C16 or early C17, with later alterations including remodelling of circa mid C19... In spite of the C19 remodelling this is undoubtedly an early building with an impressive granite lateral stack at the rear, and the front with its original granite doorway and C19 fenestration makes a valuable contribution to Ford Street.’

33 FORD STREET. Listed by English Heritage (ID no. 85074) as ‘Detached cottage, originally part of larger house, now demolished. Circa early C17 or possibly earlier... Roof: pegged roof. One blade of 1 truss and 3 reset collars, 1 smoke-blackened and the collars are lapped to face of the principals. These reset early timbers do not necessarily belong to this house. In spite of the uncertainty about the plan of this house, it does have many interesting features and undoubtedly it is not later than C17. As an early building in the backlands it has additional interest in the development of the town.’

35 FORD STREET. Listed by English Heritage (ID no. 85075) as ‘House in a row, originally part of large house. Probably C17 or earlier, remodelled and enlarged circa mid to late C19.’

43 FORD STREET (BELMONT HOUSE). This property and no. 45 next door used to be in one ownership: there were interconnecting doors at ground and first-floor level (both now bricked up). Included in the Courtenay Survey (circa 1790) as being in the occupation of Mr William Bragg, who also owned Crookhay in Court Street and the Tanyard in Ford Street. At this time the front of no. 43 was a thatched barn with a cottage behind. After a fire in the late 19th century it was rebuilt as a townhouse. [IJFM]

45 FORD STREET (BELGRAVE HOUSE, SPARROWHAWK BACKPACKERS). Originally in the same ownership as no. 43. Included in the Courtenay Survey (circa 1790) as being in the occupation of Mr William Bragg, who also owned Crookhay in Court Street and the Tanyard in Ford Street. In the 20th century the owner was a butcher: he also owned a butchers house in Ford Street (the thatched house at no. 17). Behind no. 45 there is an early nineteenth-century slaughter house with original wooden lifting apparatus still in situ. This is listed by English Heritage (ID no. 85079) as ‘Slaughterhouse in back yard of former butcher's house, Belgrave House. Probably early to mid C19. This is an interesting small example of a building type which is rarely found so complete with its simple wooden machinery and tackle’. The orchard to the rear was developed in 2001. [IJFM]

48 FORD STREET (PITT HOUSE). Listed Grade II* by English Heritage (ID no. 85076) as ‘House. Circa 1700 probably remodelling of an earlier house with further modifications in circa late C18.’ The listing adds: ‘Pitt House illustrates well the development of the traditional plan to provide the improved accommodation expected by the late C17 and early C18. Substantial houses of this period are uncommon in Devon and Pitt House is very intact both internally and externally. The rear elevation is an important as the well proportioned front because it shows clearly the evolution of this interesting house.’ The Moretonhampstead conservation area appraisal (by Dartmoor NPA) adds that it is ‘certainly the most substantial house in the town, with an impressive, dressed granite, seven-window front set off by a Tuscan doorcase. The weatherings on all the granite stacks suggest it was also thatched when ‘created’ in 1700 from a very substantial remodelling of an earlier house. Sir Thomas Bowring stayed here on his frequent visits to Moretonhampstead towards the end of the 19th century, which is about the time the roof was replaced in slate and when the multi- paned sash windows were changed to four panes from either twelve or sixteen.’ The outbuilding to the north is separately listed by English Heritage (ID no. 85078) as ‘Outbuilding, probably a service range including a kitchen, at rear of No. 48, Pitt House (q.v.), and now a ruin. Probably circa 1700 and contemporary with remodelling of Pitt House... Interior: in west gable end a very large fireplace with massive square section timber lintel. There are no ovens. There are also no ovens in the kitchen of Pitt House and the dairy wing is without a fireplace.’

50 FORD STREET (FORDER HOUSE). Listed by English Heritage (ID no. 85080) as ‘House, circa 1800.’ However the listing goes on to note 18th century elements in the service wing. It concludes: ‘Forder House is remarkably intact and has been virtually unaltered since it was built. It is unusual in having interior features of such high quality for a circa 1800 house that still has a single depth plan and a relatively simple exterior.’

BEAM COTTAGE. Listed by English Heritage (ID no. 85069) as ‘Possibly a row of houses, sub-divided into a row of cottages and now one house. Circa late C16 or early C17... A row of early 2-room plan house like this is very uncommon.’

RING OF BELLS. In 1762 the church granted a licence for casting the five old bells in the Church tower into six new bells. Perhaps this was the occasion of the sign of 'Six Bells' and could have caused some confusion. Both names appear on licences and in Trade Directories for the early 19th century. In 1824-1828 Joseph Eastabrook is listed as landlord of both Six Bells and Ring of Bells, but in 1835 only the Ring of Bells is shown on the 'May Murder' map (no. 1, J. Endicott). In the 1850s Eliza Lethbridge, widow of the licensee of the Six Bells, married Dennis Harvey, landlord of the Ring of Bells, and the Six Bells then seems to disappear. The Ring of Bells was acquired by the brewers in 1903, and later became a private house.

TAN YARD. This was down the alley behind no. 22 Ford Street and included all the space now occupied by nos 22-32. Included in the Courtenay Survey (circa 1790) where Mr William Bragg is said to occupy a dwelling house, outhouses, tan yard and offices adjoining. It previously belonged Joshua Nosworthy. [IJFM]