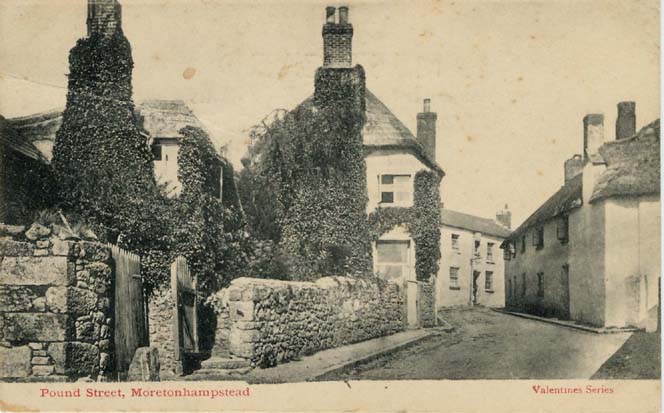 Although the Courtenay Survey is marked 'The Manor Pound' on this street, no pound (for stray animals) as such is identified or otherwise known.

29-39 POUND STREET. Cottages built by Lord Hambledon at the time before the outbreak of the First World War.

POUND COTTAGE. Listed by English Heritage (ID no. 85098) as 'Small farmhouse and adjoining outbuilding which is now incorporated into the house, and adjoining linhay. Probably late C18... This is an interesting small farmhouse with a contemporary stables and linhay in one long range.’'The lack of features means it is not possible to date this building; however its plan and its situation suggest it could be much older. It appears on the Courtenay Survey (circa 1790), along with the barn opposite. That the meadow behind was then named Pound Meadow suggests it was longer established than late 18th century. The barn used to be situated in the middle of the road; now the area between it and the house has been closed up as garden. The barn is also listed by English Heritage (ID no. 85099) as 'Small barn. Circa late C18... This barn is part of a good farm group including Pound Cottage and its adjoining linhay and the linhay west of Pound Cottage (q.v.).'[IJFM]