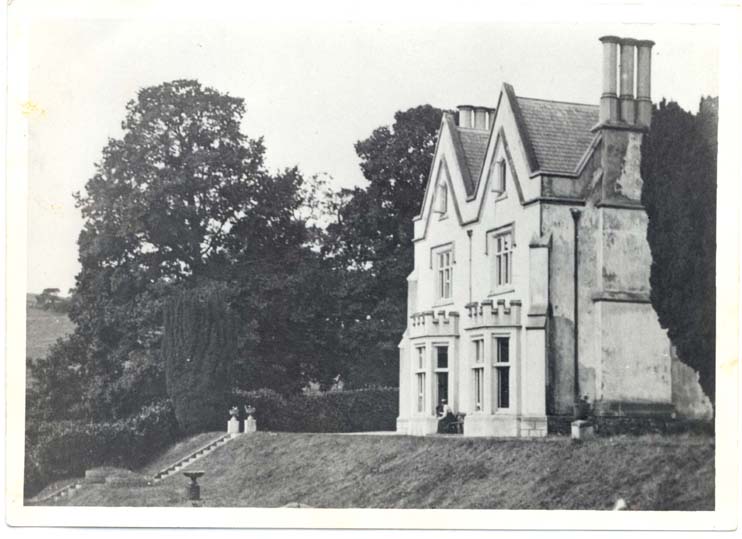 Listed by English Heritage (ID no. 85038) as ‘Manor House. Circa 1840.. Dressed granite detail. Victorian Tudor Gothic style.’ It is built on or near the site of the medieval barton for the manor of Wray, later Hayne (see WRAY MANOR). A nearby cottage is also listed (ID no. 85039) as ‘Cottage, formerly service block to Wray Barton (q.v.). Later C19.’ The long 19th century barn to the north (now converted to houses) is listed too (ID no. 85040).

The manor of Wray, which appears in Domesday, had been divided into moieties before 1249 (see entry for WRAY, MANOR OF). Hayne, Lewdon and Lettaford became the manor of Hayne; and it seems likely that the ‘Wreycombe’ mentioned along with these farms in an acquittance of 1550 means that land in Wray was also still acknowledged to be part of the manor (BL Add Charter 64197). However, Wray Barton had become a free tenement by 1396, for the lord of Hayne died in that year and his inquisition post mortem reveals only 20d rent in Wray and the feudal service of one woman there, Joan, daughter of Roger of Wray, who was not the occupier of Wray Barton.

Wray Barton was occupied by the Abbot family in the early fourteenth century; from them it descended as shown in the Visitations of Devon, pp. 704-5. The 1332 subsidy shows a Walter of Wray living in Wray at the same time as Walter Abbot was supposed to be at Wray Barton, so the surname was not yet fixed. Joan Abbot married John Norris, and Wray Barton remained in the hands of the Norris family for several generations. The last of the line, John Norris, was living in the mid-15th century. In 1446 he sold to William Corsett ‘a messuage, 1 dovecot, 1 watermill, 1 fulling-mill, 3 furlongs of land, 6 acres of meadow, 4 acres of wood and 3 acres of alders in Wrey’ for the sum of 100 marks (Wreyland Documents, p. 109). This may well have been Wray Barton itself. William Corsett was married to Joan Ford, great- granddaughter of Joan Abbot, and so the property remained in the family. It then stayed in the Corsett family until about 1500 when the sole heiress, Alice Corsett (probably William’s granddaughter rather than great-granddaughter, as shown in Visitations of Devon), married Thomas Southmeade.

Thomas Southmead was succeeded by William Southmead (who married Joanna Charles of Moreton and so acquired the Charles coat of arms), then by John Southmead, another William and another John. This last John Southmead of Wrey, who succeeded in 1620 and died in 1650, was a puritan preacher of great distinction, and through his leadership may have been responsible for the attitude of many Moretonians during the Civil War. He left a bequest of 26s 8d yearly to buy Bibles for the children of Moreton (Charitie Report, 1914, vol. 4, p. 1). He also obtained the right of presentation to Moreton church (held before and later by the Courtenay family), and presented his son-in-law, Francis Whiddon, as rector. The descendants of John Southmead (of whom at least one emigrated to America in the late 17th C) continued to hold Wray until the early nineteenth century. However, in the time of John Southmead (b. 1733), there are no further records of Southmead christenings in Moreton (to 1800). This fits with the fact that the Southmeads also held property in Chagford during the 18th century, and latterly owned a third share of the manor of Chagford. It seems that by the late 18th C they were absentee landlords of Wray, which remained as a substantial farm with a decaying mansion or manor house. The last Southmead owner of Wray, John Rowe Southmead, died in 1833, having also inherited Hayne and Great Sloncombe from a Nosworthy heiress who married a Southmead, and the manor of Holy Street in Chagford from a Rowe heiress. Hayne and Wray were thus reunited once more; they passed to John Courtier.

In a 1846 letter headed 'Wray House' from Courtier to Stockdale (now in the Devon & Exeter Institution), Courtier says he is building a house at Wray 'a few yards from the old cassellated place that I am living for the present time'. He says 'the old house appears as strong as ever' having stood for 700 years and been the home of the Southmeads for centuries. He says in a P.S. 'There is an Old Chapel here standing now with some curious timbers about it. We use as a cellar'. The ruins of the old ‘cassellated place’ survive in the grounds of WRAY BARTON and are listed by English Heritage (ID no. 85041) as being late medieval.

The Exeter Flying Post noted in its issue for 27th June 1850: ‘On Saturday last about noon a fire broke out on premises adjoining the farm house at Wray Barton, the property of John Courtier Esq. The West of England and Sun engines were immediately despatched to the spot, when it was discovered that the building, in which were kept many valuable agricultural implements, was on fire, and speedily demolished, from which it communicated to the farmhouse, which was partly occupied by a farm labourer, Mr Courtier residing in the other portion. The thatch being very dry, it was found impossible to stop the progress of the fire, and the premises were speedily reduced to a heap of ruins. A great deal of the household furniture, fortunately insured, was saved. This ancient building was in the possession of the Southmeads for several centuries back; and in a part of the building were the remains of a chapel, in the arched roof of which was to be seen some fine carved oak; and its ancient roof, which was covered with shingle, was also in a good state of preservation, but it has had for a number of years a thatched roof above it.’ In 1851 John Courtier (then aged 43) was livnig at Wray Barton and described himself as a landowner of 340 acres. In 1862 he sold the estate to Robert William Crump, a ‘retired’ indigo planter aged thirty-three, who continued to live there until the 1890s. [IJFM]

Click here for a previous version of this entry